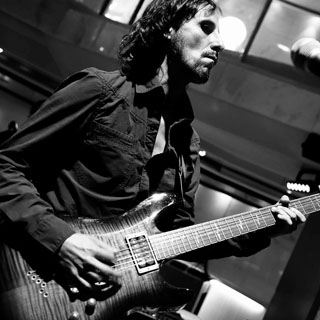 Sebastián González Guitarist, composer and music teacher born in Bogotá, Colombia. He studied music at the Javeriana University, El Bosque University and the Cristancho Academy in Bogotá. In 2001, became part of the Colombian project Mauricio & Palo de Agua, a group that publishes 3 albums (Canto Caribeño, Contigo, Viernes) with the record company EMI Music, in which they were signed as exclusive artists. Of these 3 albums, there were radio hits that reached the top of the lists of Latin American music, among which are Niña, Canto Caribeño, Darte un Beso, Dame tu Amor, Esa Muchachita among others. These recordings made the band achieve, among other things, numerous nominations for the Shock and Nuestra Tierra awards in Colombia, having obtained the Golden Sigla Award at the Latin American Festival in Milan, Italy and two nominations for the Latin Grammy Awards (best new artist, best tropical song). During his stay in the band, he collaborated in the composition and production of these albums, and was the live guitarist of the band in the more than 800 concerts they made throughout the territory of Colombia, and numerous international tours visiting countries such as Venezuela , Ecuador, Peru, United States, Italy, Spain, Switzerland, Poland and Germany. The band was invited to play in the White House for the celebration of Colombian independence, and also participated in many events together with the Colombian government in national and international stages. Later he moved to Australia and worked for P & O cruise line, as a guitarist and rock singer, performing more than 1500 shows over 2 years, in which we travel for 6 countries around Oceania (Australia, New Zealand, Vanuatu, New Caledonia, Indonesia and Fiji). Back in Bogotá, directs the project Moonetz, with which they publish the album “A New Direction” in 2014. The album is acclaimed by national and international critics, obtaining numerous reviews by the specialized press, and making a local concert tour. In his career, Sebastian has shared stage with artists such as Juan Luis Guerra, Fito Páez, Marc Anthony, Aterciopelados, Gilberto Santarosa, Juanes, Los Prisioneros, Fonseca, Cabas and others. Besides all the performing/recording/touring experience, Sebastian has been involved in teaching both privately and as a high school music teacher. Currently in New york City, he’s performing with bands like Outernational, The Ritualists, and Axel Music Box, and developing projects at Premier Studios in Times Square.